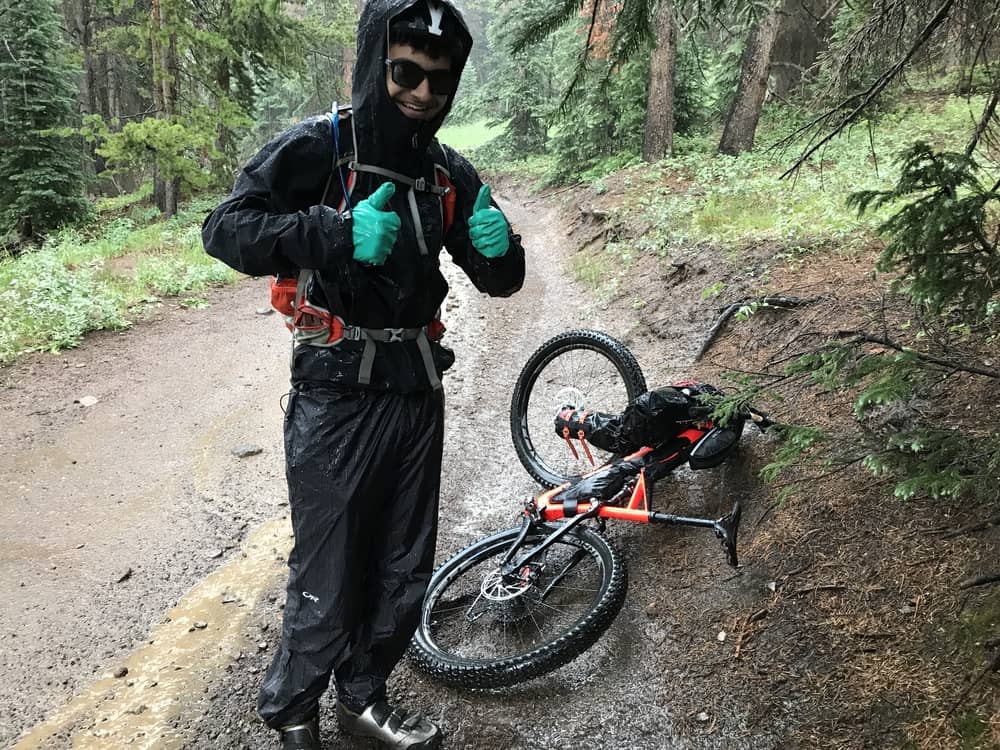 As much as day 8 was “meh”, day 9 up to Marshall Pass was the exact opposite.  We had an huge climb (5200 ft over 24 miles), experienced a crazy small-world situation on the trail in the middle of the forest, rode along the Monarch Crest at 12,000 ft as a huge thunderstorm grew and then dumped on us, met cool through-hikers from San Diego, and helped a poor guy who shattered his shoulder mountain biking.  Despite all the rain, it was an epic day.

We awoke on the side of Mt Shavano, and headed down early in the morning to cross highway 50.

Most of the day would be climbing up to Monarch Crest.

Shortly after we crossed South Fooses Creek, we came upon another bikepacker coming toward us. We stopped and he said, “I believe those are my bags on your bikes.”

It’s A Small World After All

A bit of backstory – in early June I bought new Specialized Stumpjumper bikes to ride the CT.  Shortly after we got them, I searched for bags that might fit in the frame gap, but found none.  So then I searched for a custom manufacturer and came upon Greg Hardy at Rockgeist in Asheville, NC.  After I sent him a cardboard pattern, he was able to build two bags for me fast – about a week. They are great high quality bags, and have withstood lots of mud, 60 mph wind in the bikes on top of the car,  and frequent zip/unzips as the packs store most of our food.

When I got them, I sent Greg a pic showing how well they fit into the frame. He was happy and told me he too was doing the CT from Durango to Denver in July and that we might see each other on the trail.  I thought the chances of that were remote with the breaks we were taking, the reroutes, etc.

I was wrong.  We had just bumped into Greg in the San Isabel forest in the middle of nowhere!  So we took a bunch of pix of his work.

Just as we were about to depart, four mountain bikers came down the same path, and stopped.

One of the guys says, “Ed?”  I say, “Yeah?” And he responds, “It’s Nick.” It was Nick Thelen and friends from Colorado Springs up for the day doing just this segment! Nick is the guy whom I consulted with to prep to do the CT, and also who advised I get the Stumpjumpers. What a freakin’ small world!

We took our pix and got on our way.  The wildflowers were strong on this segment.

After a tough day of climbing, the summit was in sight, but the final stretch was on an even steeper slope.

But we didn’t have time to stop for long, as a major storm was on the way.

We got on our bikes and proceeded to climb up Monarch Crest.  I was a bit nervous as lightning and thunder got bigger, but we didn’t have many options – we had to get down to Marshall Pass.

This is what we had been working toward for days.  The video below really captures how pretty the area is on top of the world.

As we descended we met up with through-hikers Ethan and Lannie, two more really cool people from San Diego.  We would see them several more times in the coming days.

We continued our descent, and then came upon two guys from Houston walking their mountain bikes down.  We asked if they were ok, and one said, “No, I think I’ve broken my shoulder.”  We discussed how we could help, and settled on the following.  First, we gave them a sling and Ace bandge we had in our med kit (Kyle and I took a NOLS Wilderness Medicine class in March and were prepared). Second, I’d text them using my InReach, and if I didn’t receive a response in a few hours, would call 911.  Third, Kyle and I would go down and see if there were any cars in the Marshall Pass parking lot and ask for help.

We got going, and then the skies opened up.  For the first time, we had to put on all of our rain gear mid-day.

When we got to the parking lot we found two kayakers from Sedona, AZ about to leave.  I explained the situation, and they hung out for an hour until the Texans came down, helped them get their bikes onto their cars, and then headed down to the hospital in Salida.  Such great people in the mountains!

The guy texted me that he had completely shattered his shoulder.  I’m still amazed at his pain tolerance and composure.

We finally settled down and pitched tent in a cow pasture.  It seemed that the rain had re-hydrated every damn cow pie in the whole field, and I stepped in several.  But it was a good day.