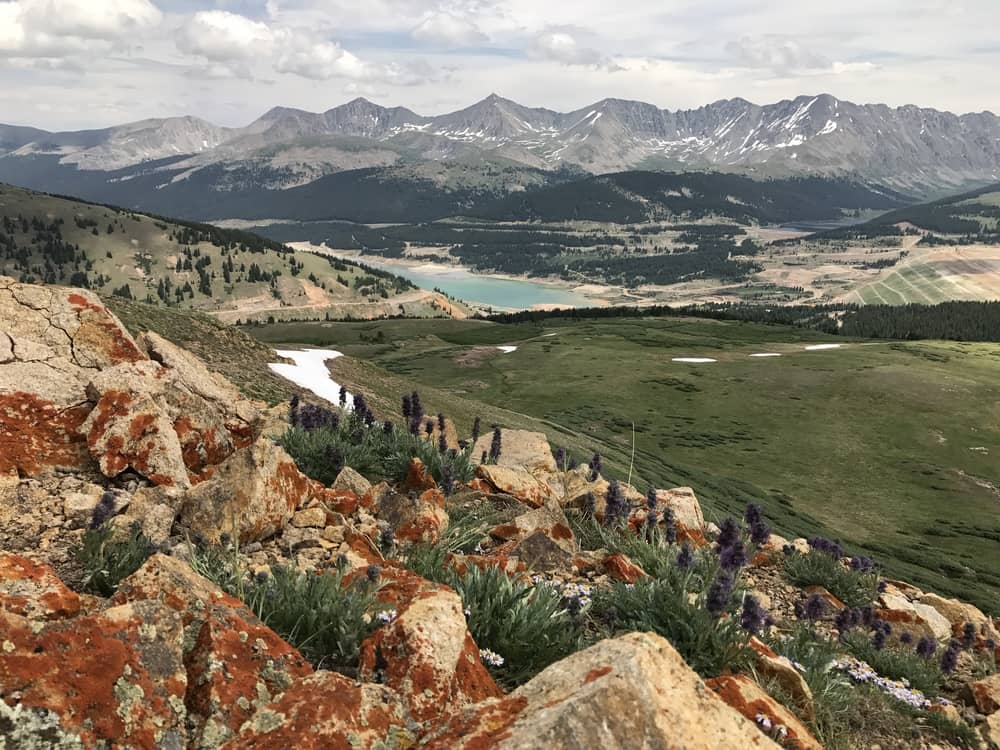 Day 4 was great, but Day 5 was even better. We climbed up past Copper Mountain to Searle Pass, and then descended through huge meadows of wildflowers. But then the rain began.

We started the day climbing up through Copper Mountain.

As we started to move above treeline, we came upon Janet’s Cabin, which is part of the 10th Mountain Division Hut System. I’ve heard about these huts, but never stayed in one – it’s now on the list to do. The wildflowers at this altitude became quite spectacular, so Kyle and I pulled off trail to take a bunch of pix.

This time we really were cresting 12,000 feet, and some of the trail was still buried under snow.

We took some really nice pictures of the tailing ponds of the Climax molybdenum mine in the distance. The orange lichen on the summit rocks was really intense.

From the summit we then bombed down through intensely colored mountain meadows and dense wet forest to where the 10th Mountain Division trained.

After Searle you quickly hit Kokomo Pass before descending to Camp Hale.

At the bottom of the descent we encountered this ominous sign.

Camp Hale was a US Army training facility where the country’s best skiers trained to take Italy during WWII  as part of the 10th Mountain Division.

After the war many of these people came back to Colorado and founded several ski resorts in the state including Vail.  As you enter the resort by the “covered bridge,” you’ll see a statue dedicated to these men.

This is how the area looks today.

The army did a ton of research at the facility on how the human body could withstand brutal cold and mountain conditions.  The first use of nylon for climbing ropes was done at Camp Hale.  And, much of modern ski apparel and avalanche mitigation was initially researched here. Maybe there were still a few unexploded shells in the woods?  We kept close to the trail.

We got on our way and started climbing up  towards Tennessee Pass.

Finally we crossed the 10th Mountain Division Memorial Highway, rewatered at a stream, and found a place to camp.  It was starting to look ominous.

No sooner had we recorded our recap than the rain started.  And it kept up all night.  This was our first big rainstorm in the tent, and it held up well, although we weren’t used to the condensation buildup hitting us all night as the rain dropped on the tent.

Enjoying your blog, Ed! I’m pretty sure I won’t be riding this trail (ever) so thanks for sharing. What a great adventure for father-son to experience! You guys make it look easy….rock on!!