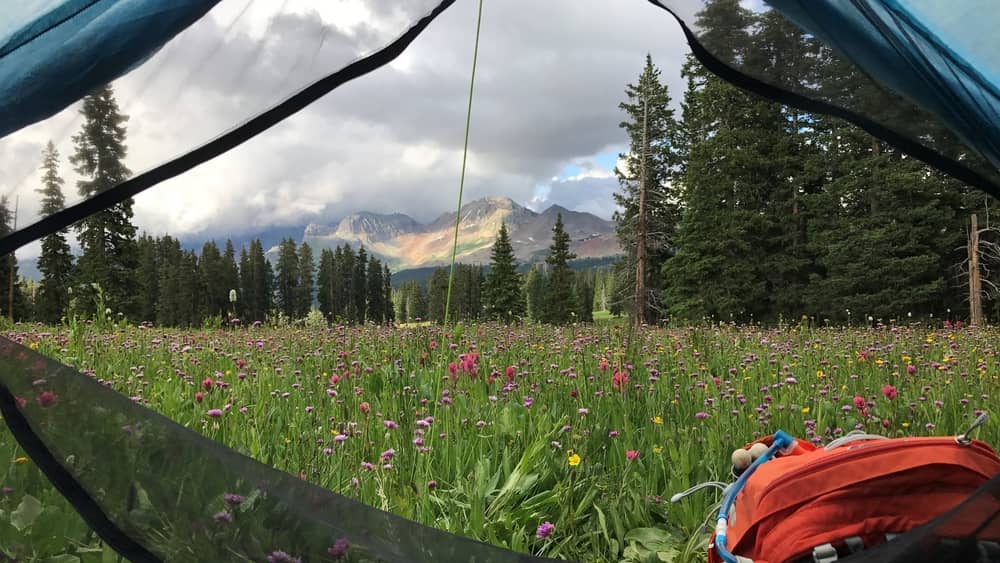 Wildflowers, wildflowers, wildflowers.  The downside of doing the CT in July is the predictable clouds that gather every afternoon and become major thunderstorms which leave the trail a muddy mess. But the big upside is that wildflowers are abundant, particularly at the highest elevations.  Today we ended at Hermosa Peak in a stunning wildflower meadow.

We started the day bright and early at 7am at Little Molas Lake on the pass, but the weather looked dire.  It was cloudy and misty, and I hoped that it would burn off.

It did – mostly. As the sun rose, it became clear how pretty this segment would be.  Huge views and meadows of wildflowers for the entire day.

This was another day of big climbing up to a saddle at 12,500. The views became more stunning as we ascended.

Finally we hit the summit at noon. We had a huge downhill in front of us and were excited to get back on the bikes.

By 4pm we had luckily avoided rain, but the sky was getting dark with thunderclouds, so we decided to park at the base of Hermosa Peak for the night. We ended up near a stream on the side of a rock fall. I got no sleep that night as every so often a big chunk of rock would tumble down the mountain and scare the s*^t out of me.

But at least we had a great view out of the tent again.