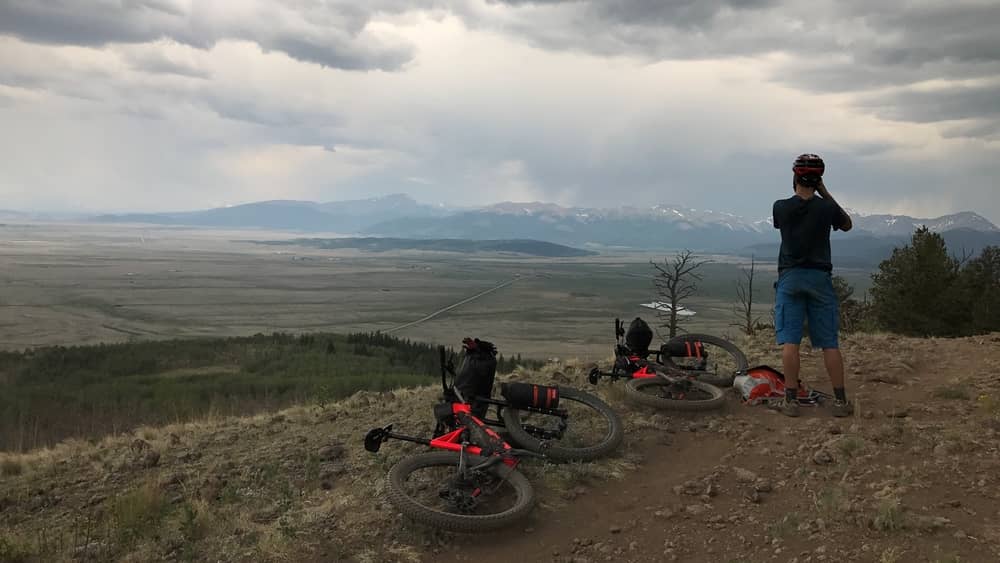 On day three we wanted desperately to get off the Lost Creek reroute and back onto the trail, and we did it. By the end of the day we had ridden 40 miles, climbed 4300 ft, and arrived at Kenosha Pass.

We got on the road and passed a few more buildings from the old Taryall ghost town.

Then we hit the Taryall reservoir.

At this point I could hear Kyle’s bike making bad noises – every time he cranked, I could hear something knock in the bottom bracket. He thought it was the clipless pedal, but when we stopped to investigate, I found that the bolt in the bracket had come loose and the chain ring was moving side to side with every pedal stroke. And of course, that large hex wrench was the only one I didn’t bring!

We were just a mile short of what looked like a big farming facility, so we stopped there to see if they had a wrench. Sure enough, Dave at the Eagle Rock Ranch saved our bacon by lending us a wrench, and we were on our way.  Thanks Dave!

Finally we left the paved road for dirt on the way up to the trail.

As we ascended we found another reminder that it’s fire season in Colorado. We passed through a small burn zone that still smelled of burnt wood.  The fire had to have been within the last few weeks.

By this point I had a text from Cris on my InReach that segment 7 between Breckenridge and Copper Mountain was closed due to fire. Again, a major bummer – one of the nicest upcoming segments offering huge views of both Breck and Copper Mountain.

Back on the Trail

As I flew down from one of the initial summits of the day, Ride with GPS did its job and screeched that I had passed the CT.

We continue to climb and finally got to several awesome views of South Park.

We began a huge descent down to Kenosha Pass just as a major afternoon storm started to brew and rain on us.  As we got down to the pass we found a rest room to take shelter under just as hail started.

We were out of water but couldn’t go over to the nearby lake to resupply because of all the lightning.  As the rain subsided a bit I stepped out to take the above pic, and noticed the big blue thing on the side.

We refilled our bags, and headed across highway 285 to continue the trail.

After being on the trail for three days, we stunk.

Finally, we descended to a beautiful meadow near a stream and pitched our tent.  We made dinner and were out by 8pm.

The next day we had two big climbs in front of us, including Georgia Pass and over the Continental Divide at 11,600 ft.

The first few segments of the CT aren’t that interesting visually, but by this point, the views start to become epic.  Check out the lightning strike on video while taking refuge at the restroom.